Matic, an innovative system of sofa components created by Piero Lissoni and conceived as a platform suspended in space, somewhere between an island and a work of architecture. The distinctive characteristics, here again, are aesthetics and technology. 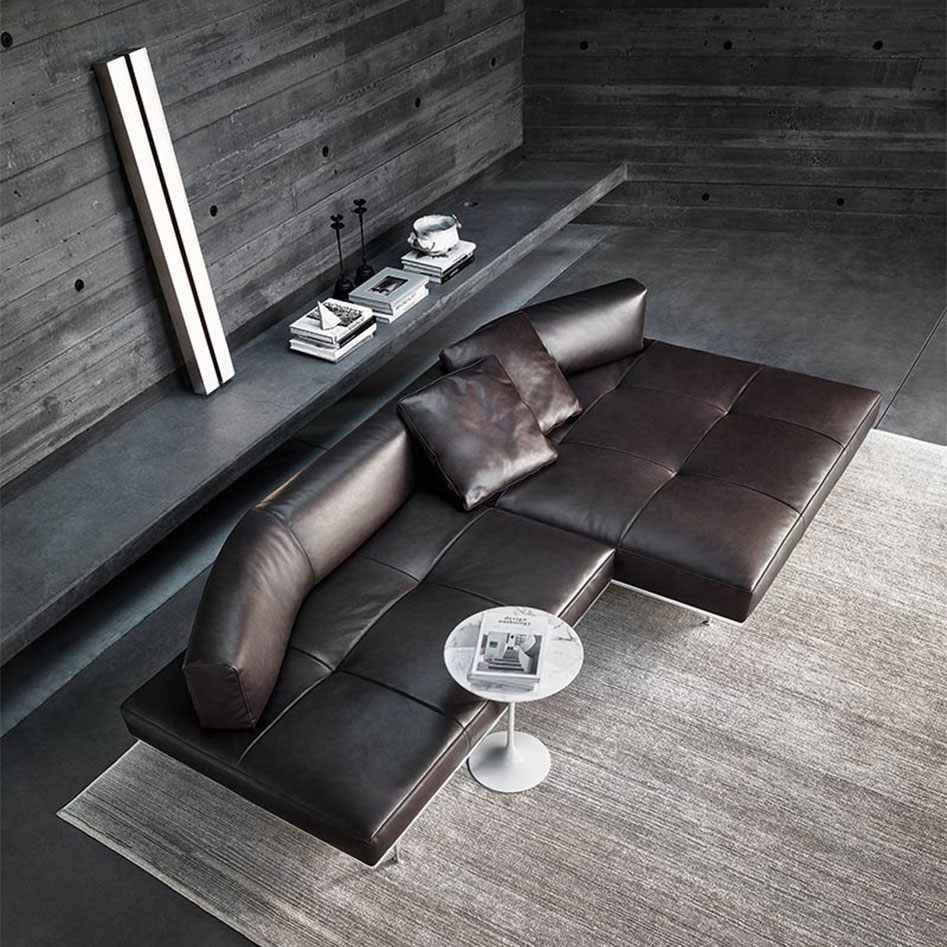 Modular or linear, the collection stands out for its ample seats of different depths, covered in leather or fabric. It is composed of modules, including chaises longues and terminal peninsula units, to provide seats upholstered with evenly-sized squares, or detailed with a T-shaped seam, combined with a special curved back featuring a mechanism that can be turned to adjust comfort for relaxing, reading or conversation. The frontal profile – the key aesthetic feature of the design – enables adaptation to a wide range of settings.

Structure: the front structure profile is in aluminium with a glossy finish, charcoal painted colour or upholstered in fabric or leather. The upholstery is not removable.

Pillows: are particularly recommended for the elements with a dept of 107cm. 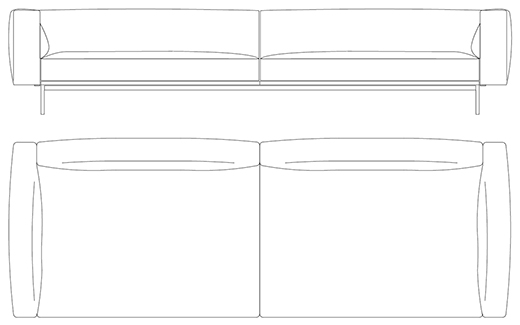 These products are part of a System Sofa Components. More configuration are available. 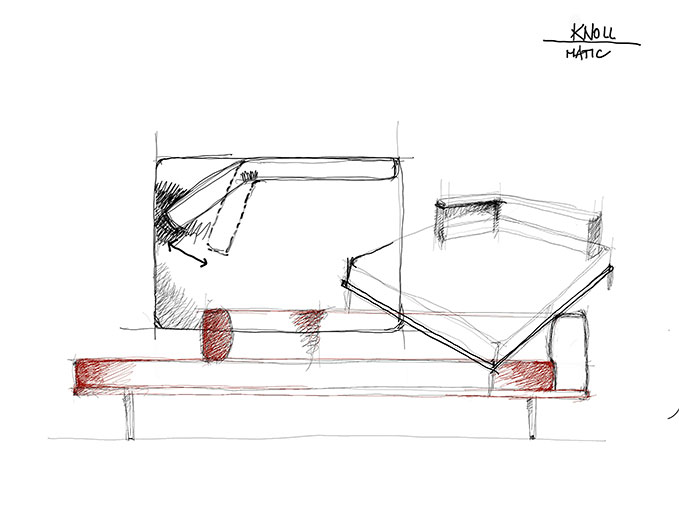 Matic offers new functional and aesthetic possibilities. Low, linear seats, enhanced by capitonné details, are joined by armrests and backs that can be shaped thanks to an internal mechanism offering structural support and comfort. The cushions complete the collection, guaranteeing absolute ease during use. Timeless aesthetic details of lightness and elegance meet with precise workmanship at the highest levels of technology and quality, values that have always been earmarks of the Knoll character.

A high-profile technological exercise that sets the character, narrating a stylistic mission while logically determining its own form. Silent by nature, the Matic collection can enter any context with discretion, almost blending into the background; or it can take center stage with its forceful (though always discreet) character. Ideal for the home or for contract environments, Matic represents a tribute to original Knoll design, with a clear reference to the stylistic approach developed by Florence Knoll.

The architect, designer and art director Piero Lissoni (1956), after graduating from the Politecnico di Milano, founded the Milan based interdisciplinary studio Lissoni Associati in 1986 together with Nicoletta Canesi, developing architecture, interior and industrial design projects. Ten years later saw the opening of Graph.x, the graphics studio specializing in brand development and corporate identity. In 2013 it was the turn of Lissoni Architettura and in 2015 the New York based Lissoni Inc. was established, to follow the international market.
With its staff of 70, the studio develops architecture, interiors, design and graphics projects, including villas, residential complexes, offices, factories, theatres, restaurants and hotels, yachts, shops, retail areas, museum fit-outs, exhibition stands, furniture and lighting.
Piero Lissoni is art director of Alpi, Boffi, De Padova, Living Divani, Lema, Lualdi, Porro and Sanlorenzo for whom he designs a variety of products. Recognized as one of the masters of contemporary design, he works for many international brands including Alessi, Antrax, B&B, Bonacina1889, Cappellini, Cassina, Cotto, Fantini, Flos, Glas Italia, Golran, Illy, Janus et Cie, Kartell, Kerakoll, Knoll, Nerosicilia, Olivari, Salvatori, Tecno, Viccarbe.
Recently completed architectural projects include The Middle House for the Swire Hotels Group in Shanghai (2018), The Oberoi Al Zorah Beach Resort Ajman in the UAE (2017), Oceana Bal Harbour, the masterful 240-unit condominium in Miami (2017), Casa Fantini, an 11-room hotel on the shores of Lake Orta (2017), the Sanlorenzo SX88 yacht (2017), Roomers Hotel in Baden-Baden with 130 rooms and spa (2016), Conservatorium Hotel in Amsterdam (2012), Mamilla Hotel in Jerusalem (2009), the renovation of the historic Teatro Nazionale in Milan (2009) and the production headquarters of Fantini spa (2018), Kerakoll Design Lab (2014), Glas Italia (2010) and Living Divani (2007).
Current projects include the Hotel Park in Croatia, the Autograph Hotel and Residences in Budapest, SLS Lux Hotel and Residences in Washington D.C., the Miami Beach Ritz-Carlton Residences, apartments at 45 Park Place in New York, the Hilton Tbilisi hotel in Georgia and private villas in Amsterdam, New York and Mumbai.
Lissoni’s interest in the art world brought him to design a variety of temporary shows in Milan: the room for exhibitions at Bagatti Valsecchi Museum, inaugurated with “The triptych of Antonello da Messina” (2015) and recently featuring “The Museum of Innocence by Orhan Pamuk” (2018), the retrospective of the photographer Giovanni Gastel, curated by Germano Celant, at Palazzo della Ragione (2016), the anthology of the Renaissance painter “Bernardino Luini e i suoi Figli” at Palazzo Reale (2014). Fondazione Palazzo Te has inaugurated in Mantua the exhibition “Tiziano/Gerhard Richter- Heaven on earth ” where Piero Lissoni, with Lissoni Associati and Graph.x, has designed the installation, the project of visual identity and the catalogue to accompany the show (2018-2019).
Piero Lissoni has received a series of international awards, including the Good Design Award, the Red Dot Award and the Compasso d'Oro ADI; he is Board Member of the MAXXI National Museum in Rome, he is visiting professor and part of the Advisory Board at the Politecnico di Milano, he is Honorary Member of the Altagamma International Council.