Like his Wassily chair, Marcel Breuer's Laccio Tables are critical to the story of 20th-century design. Breuer's use of tubular steel to define lines in space beautifully exhibited in these simple nesting tables revolutionised furniture construction and inspired many subsequent generations of designers.

As a Bauhaus apprentice in 1925, Marcel Breuer conceived the low table as a companion to the Wassily chair, the first tubular steel design based on the tubed frame of a bicycle. The KnollStudio logo and the signature of Marcel Breuer are stamped into the base of the tables.

Polished chrome base.  Three laminate colours for the top: white, black and red. Tops available also in a wide range of marbles.

In an interview with a Knoll historian, Marcel Breuer described how he came to begin experimenting with bent tubular steel while at the Bauhaus:

“At that time I was rather idealistic. 23 years old. I made friends with a young architect, and I bought my first bicycle. I learned to ride the bicycle and talked to this young fellow and told him that the bicycle seems to be a perfect production because it hasn’t changed in the last twenty, thirty years. It is still the original bicycle form. He said, “Did you ever see how they make those parts? How they bend those handlebars? You would be interested because they bend those steel tubes like macaroni.” “This somehow remained in my mind, and I started to think about steel tubes which are bent into frames—probably that is the material you could use for an elastic and transparent chair. Typically, I was very much engaged with the transparency of the form.” 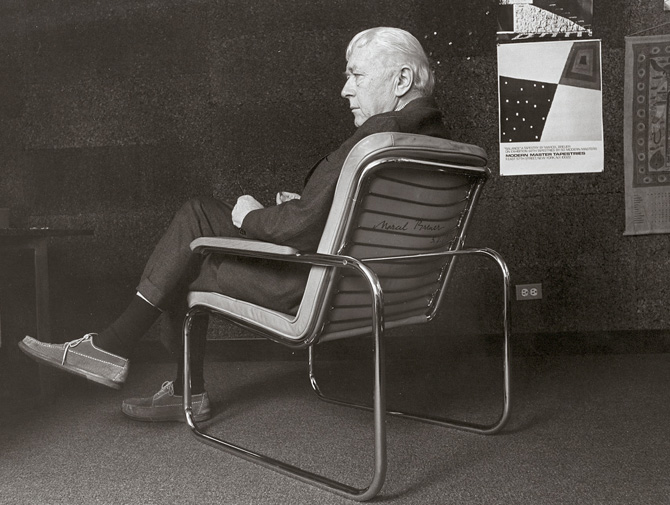 Protégé of Bauhaus founder, Walter Gropius, Marcel Breuer embodied many of the School's distinctive concepts and was and one of the School's most famous students. He returned shortly thereafter to teach carpentry from 1925 to 1928, and during this time designed his tubular-steel furniture collection: functional, simple and distinctly modern. His attention drifted towards architecture, and after practicing privately, he worked as a professor at Harvard's School of Design under Gropius. Breuer was also honoured as the first architect to be the sole artist of an exhibit at the Metropolitan Museum of Art.