INTERNI Magazine, the Italian publication that offers an international review of architecture and design, dedicates the DesignINg Cover Story to Knoll on the 2020 April issue with the contribution of Domitilla Dardi, design historian and curator at Rome’s MAXXI, who signed the article. 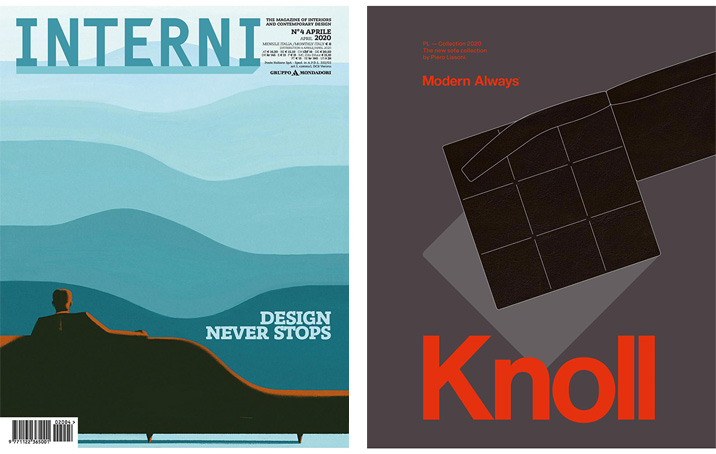 A sense of history has been the spirit of Knoll from the outset. Projects by new designers exist in harmony with those of the great masters of the past, in a wide perspective that welcomes contemporary stimuli while also looking beyond, towards a modernity that is constantly renewed in time.

Prizes, signatures or numbers cannot suffice to reveal the greatness of a company that for over 70 years has been an absolute reference point in its field. Were the formula as simple as a repeatable mathematical equation, such results would be achieved by many an enterprise. Instead, there has to also be a profound awareness of unique character, the clarity to pursue the objective of a modernity that is constantly renewed in time. When Hans and Florence Knoll founded their company they did not base its identity on any previous models, but created their own line of thinking. The wanted a catalogue that would bring together the great masters of design, capable of interpreting the object in relation to space; architects of remarkable depth, able to sum up decor in a complex vision that extends to the relationships between human beings, space and vital functions. 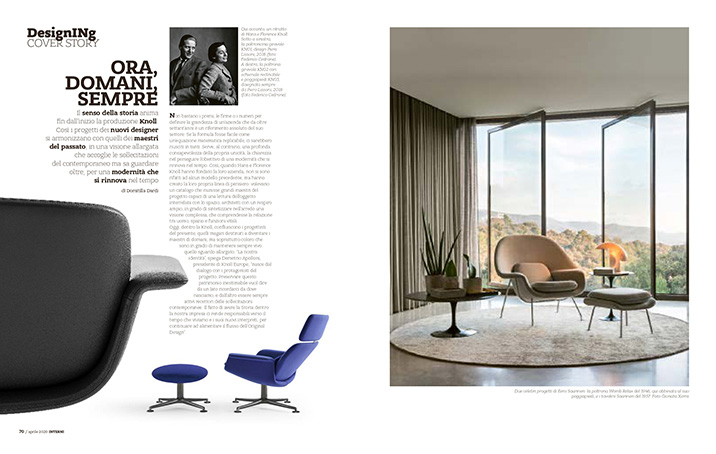 Today, inside Knoll, designers of the present come together, destined perhaps to become the great masters of tomorrow, but above all to keep that expanded perspective alive. “Our identity,” Demetrio Apolloni, President of Knoll Europe, explains, “comes from dialogue with the leading figures in design. To preserve this exceptional heritage means remembering our roots, on the one hand, while always being receptive to contemporary stimuli. The fact of having History inside our company makes us responsible with respect to the time in which we live, finding new interpretations to continue to feed the progress of Original Design.”

The talents who narrate the most recent history of Knoll today are highly acclaimed architects and designer, of course, but there is also something more. What brings together such unique, different personalities – such as Koolhaas, Lissoni, Barber & Osgerby, just to name a few – is the ability to create products that express the Zeitgeist, the spirit of our time, with the ambition to go beyond it, to look into the future. The furnishings they design are very different from each other, not created in continuity with their peers, yet they are perfectly capable of establishing a dialogue, in harmony with the great Knoll classics, from Saarinen to Mies van der Rohe. To do this, they must have the ability to be simultaneously inside and outside their own time, immersed in the cultural context but ready to break free of it, to observe it from a wider perspective. Which means knowing the difference between a signature language and a style or a passing fashion. The phonemes of this language can exist in an international and cosmopolitan dimension, proudly representing the particular cultures they channel. This is why the dialogue between works of different eras, in a Knoll setting, is never strident, always harmonious: each item brings its own character, in a sharing of design visions that enriches, creating distinction without separation. When they are individually analyzed, the voices in this chorus become very personal. The Gould Sofa by Piero Lissoni and his Grasshopper table, but also the KN Collection, for example, play the role of a great tenor, able to follow the orchestra but also to perform magnificent arias. They are timeless classics, no less than the creations of the great masters. They are the heirs of the motto Modern Always that has always indicated the objective of the company and its interpreters. A younger voice is that of the Smalto table by Barber & Osgerby, which has the lightness in dialogue with the greats of the past that only new generations of talent can possess, without succumbing to the burden of responsibility implied by such an important legacy. 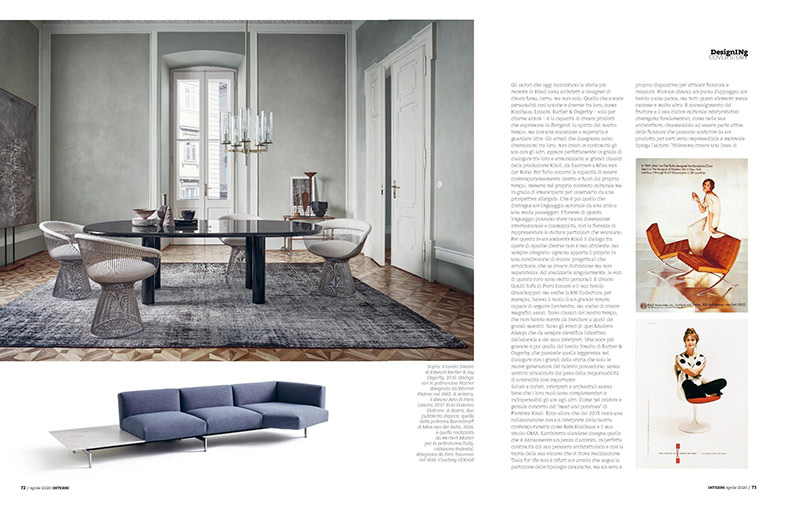 Soloists and choristers, protagonists and players are well aware of the fact that their parts are complementary and indispensable for the others. As in the famous, brilliant concept of “meat and potatoes” suggested by Florence Knoll. In 2013 the company began an ongoing collaboration with an outstanding exponent of our contemporary world: Rem Koolhaas with his studio OMA. The Dutch architect has designed what is decidedly an accent piece, in perfect continuity with his architectural thinking and his visionary theories. Tools for Life is not a work that follows the score of the customary typologies; it is a true device for activation of functions and relationships. Not a sofa, a counter, a table or a bench, but all these articles put together, and much more. The engagement with users and their cultural codes of interpretation becomes fundamental, as in Koolhaas’s works of architecture, summoning them to become an active part of the functions that can be triggered by a product that is in some ways unpredictable and mutable.

The architect explains: “We wanted to create a line of furnishings that would lend itself to precise but at the same time unexpected uses, furniture that not only contributes to the interior but also to its animation.”

The possibility Knoll offers designers, in fact, is to intervene with their pieces to formulate new ways of living and different functions of space. The versatility can be that of furnishings that adapt to a wide range of contexts, not only due to a question of ‘style.’ Modernity expressed in a temporal continuum reveals constantly innovative ways to respond to the issues raised by our needs in time. The need, for example, to create an office environment with a strong presence of the human and personal factor is addressed both by the classics of Florence Knoll and Eero Saarinen from the 1950s, and in the proposals of the present. Today the space of work is increasingly mixed with the space of life, because we no longer work only in the office, but also in a mobile, fluid condition, where even public and domestic spaces can become our ‘temporary offices.’ This is a concept that would not be feasible today, were it not for the fact that in the past the great pioneers worked in the direction of a human, warm design, often also personalized like a portrait, or universal thanks to its adaptability. 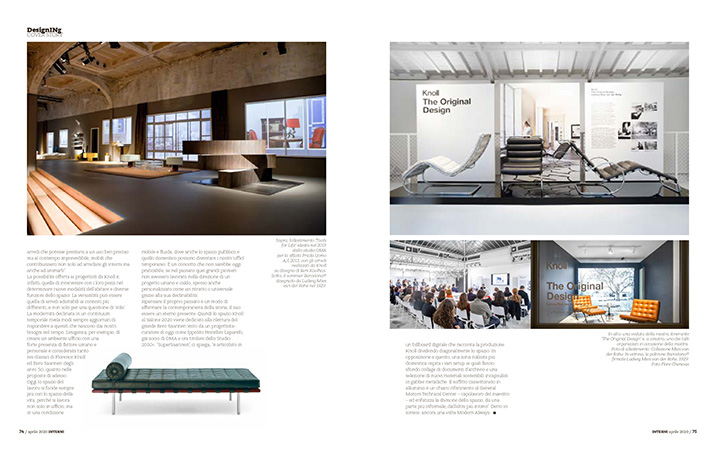 Rethinking one’s own past is a way of asserting the contemporary character of history, its way of being an eternal present. Therefore the Knoll space at Salone 2020 will be devoted to the reinterpretation of the great Eero Saarinen through the eyes of a designer-curator of our time like Ippolito Pestellini Laparelli, previously a partner of OMA and now at the helm of Studio 2050+. “SuperSaarinen,” he explains, “takes the form of a digital billboard that narrates Knoll’s production, diagonally dividing the space. In contrast, a more domestic raised zone contains the various settings against the backdrop of a collage of archival documents and a selection of new sustainable materials, encapsulated in metal cages. The coffered aluminium ceiling is a clear reference to the General Motors Technical Center – Saarinen’s masterpiece – and emphasizes the division of the space, more informal on one side, and more intimate on the other.” In short, and once again: Modern Always.